The effect of PharmaMix-M 300: high-quality (without excess water, fat and rollback) muscle growth, fat burning, increased rigidity and relief of the muscles, as well as an increase in strength, endurance, performance, reduced fatigue, which has an extremely positive effect on the relevance of the mix for athletes.

The manufacturer describes the drug as a product purposefully designed to provide the longest, smoothest and most pronounced action of drostanolone. According to the official website, the mixture is ideal for long courses aimed at the formation of dense and sculpted muscles (without excessive fluid retention, typical of long-acting steroids).

The effect of PharmaMix-M 300: high-quality (without excess water, fat and rollback) muscle growth, fat burning, increased rigidity and relief of the muscles, as well as an increase in strength, endurance, performance, reduced fatigue, which has an extremely positive effect on the relevance of the mix for athletes.

PharmaMix-M is characterized by predominantly androgenic over anabolic activity (it has strong androgenic and moderate anabolic properties), long-term effect after injection (up to 2-3 weeks), no inherent hepatotoxicity or aromatization (side effects such as fluid accumulation, gynecomastia and liver dysfunction, if the recommendations are followed, they are actually excluded). Due to the specifics of the action for sports purposes, it is recommended only for men (for women, the use is fraught with virilization).

Possible side effects of PharmaMix-M are predominantly androgenic, such as acne, hair growth, coarsening of the voice, aggression, baldness, prostate hypertrophy, suppression of testosterone production, testicular atrophy and some others. Subject to the recommended dosage, duration and duration of use, side effects are usually rare and mild.

Customer reviews of PharmaMix-M 300 are mostly positive. According to the manufacturer himself, the drug is a working mixture of steroids, and the opinions of athletes are proof of this. You can find detailed reviews about the products presented in our online store and its operation on the site itself or on various thematic sites (from forums to white lists).

The average recommended dosage of PharmaMix-M is 300-600 mg per week (up to 900 mg per week if well tolerated by the body). Since the mix has a long action (half-life – 5-6 days), there is no need for intensive injections: for an even background of action, as a rule, 2 applications on different days of the week are sufficient (for example, 300 mg on Monday and Friday).

The course of application of PharmaMix-M 300 from PharmaCom Labs effectively and relatively harmlessly lasts up to 6-8 (or more) weeks, depending on the tasks, sensitivity and tolerance by the body. To achieve optimal progress, it is preferable not to abuse the drug, but its combined use.

The use of PharmaMix-M can be described by athletes in different ways, but in the right hands, the drug more than pays for its own risks and price. And in our online store optimal conditions for its purchase are offered. 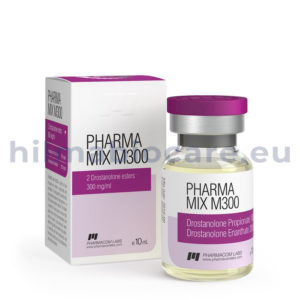